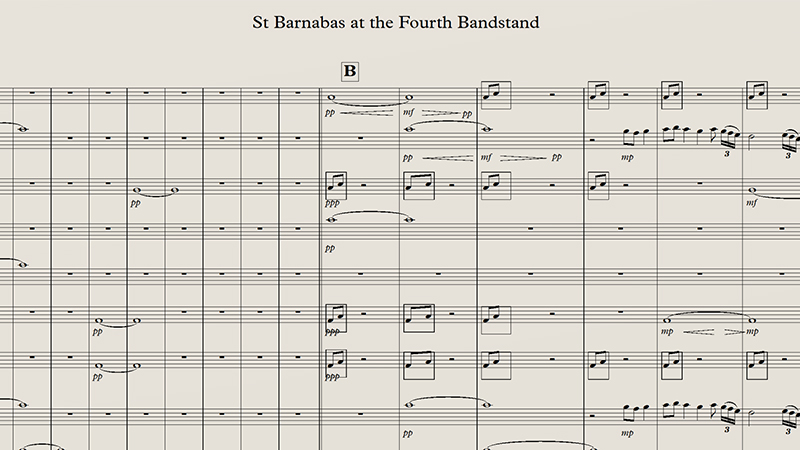 St Barnabas at the Fourth Bandstand

Barnabas is the patron saint of Cyprus.  His name means ‘son of consolation’ and his Feast Day is June 11th.

A Jewish Cypriot who sold his land and possessions in Jerusalem, Barnabas gave his money to the apostles of Jesus to fund their missionary work.  In Antioch, with St Paul, Barnabas founded a church and they converted Cyprus to Christianity.   However, after many years of working and travelling together, Barnabas and Paul parted company – Barnabas returned to Cyprus and was martyred at Salamis in 61 AD.

In the eleventh century, a series of wars called the Crusades began – these were religious wars sanctioned by the Latin Church aimed at recovering the Holy Land from Muslim Rule.

In 1218, Ranulf de Blondeville, 6th Earl of Chester, joined the Fifth Crusade and his contingent of archers and bowmen from the Cheshire Forest would have definitely included men from Macclesfield.  Ranulf’s successes in Egypt inspired many troubadour ballads – he returned to England in 1220.

Cyprus, captured by Richard 1 in 1191 and sold by the Templars in 1192, had been vital to the Crusaders as it was an important route for supplies to and from the Holy Lands as well as a safe place for injured Crusaders to convalesce. It is certain that Ranulf de Blondeville and his men would have visited Cyprus and therefore probable that St Barnabas was nominated as their saint in recognition of their safe return to England.

On his return, as a gesture of goodwill, Ranulf granted the Macclesfield men a Charter – a Guild was established in 1221, and St Barnabas was chosen as its Saint. The trades included in the Guild are unknown but is it almost certain that the archers and bowmen were included and every year the Guild would process to St Peter’s in Prestbury, carrying an effigy of Barnabas.

Macclesfield has had three bandstands (in South, West and Victoria Parks), two of which are still standing. This afternoon we add a ‘Fourth Bandstand’…and where better than Tegg’s Nose which has which has overlooked the town and Macclesfield Forest for millions of years?

In this piece, St Barnabas takes on the role of a time traveller, appearing at different points in Macclesfield’s history. Three episodes are framed by freely-arranged excerpts from a Crusade song, Ara pot hom conoisser e proer (Now one can know and prove) which was composed by the Troubadour Rambaut de Vaqueiras.

The first episode reflects the medieval history of Macclesfield – the beginning of the Gradual of the Mass of the Feast of St Barnabas (Their sound has gone forth into all the earth and their words went to the end of the world. The heavens declare glory to God and the firmament declares his handiwork) is converted into a folk dance accompanied by the sounds of hunting horns in Macclesfield Forest.

The third episode reflects the general busy-ness of the 20th and 21st centuries with the sounds of chaos followed by a silence for us to listen to the sounds around us and a touch of jazz before St Barnabas finally retreats into the mists of time!